Prior to the researching done in the 1980s by the National Institutes of Health, there was only one exclusive definition of dyslexia. If it was noticed that a child had difficulty in reading and this could not be explained because of below average intelligence, weak eyesight, defective hearing or insufficient opportunities to pursue education, then it was thought that the child must be dyslexic.

The explanation did not satisfy either the parents or the teachers; the researches too were unhappy with it. Today there are three distinct definitions for dyslexia.

Dyslexia is something that is inherited by the child that makes reading, writing and spelling in their mother tongue very difficult for the afflicted although the intelligence of the child is average.

Dyslexia – What Increases Your Risk:

There is only one recognized risk factor pertaining to dyslexia – to have either a parent or a sibling in this condition. Research shows that dyslexia is not partial towards any gender.

Disclaimer: There are no two persons with exactly the same type of dyslexia because its intensity swings from the mild to the acute; sometimes it is profound. Some dyslexics are also burdened with AD/HD.

The symptoms enumerated below show that the child may be dyslexic and therefore require extra assistance from Dyslexia Treatment Centre. Some of the symptoms are enumerated. It is rare for all of these to be present in one person.

1.  Reading Difficulties: For some reading can be slow and tiring as well as erroneous. Some parents say “their child is really struggling with their reading.” It is also said that they have noticed their child to be careless and finding it difficult to manage the big words; moreover they repeatedly make the same mistakes even on small words.

2.  Spelling problems: The child finds it difficult to remember the right spelling.

3.  Poor writing and grammar: Poor handwriting is a common problem with some dyslexics. It is known as dysgraphia.

4.  Poor mathematical skills: For some mathematics becomes something impossible. It seems totally alien and might never be grasped even when the dyslexic child becomes an adult. This may lead to inferiority complex. 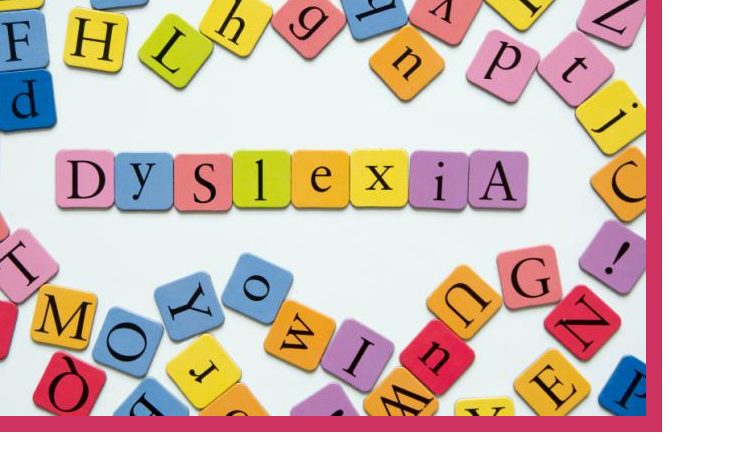 5.  Concentration: The dyslexic suffers from attention problems and cannot stay focused on any subject for a span of time.

6.  Memory lapses: Dyslexics tend to forget some things easily and quickly while retaining other things in their memory. For instance they go upstairs but forget why they have gone there.

7.  Balance or co-ordination problems: The dyslexic tends to be clumsy and faces difficulties in taking part in some sports.

8.  Fear and anxiety of learning:

9.  Low self-esteem and under-achieving: Many of the dyslexics are erroneously called “thick”, “stupid” and even “lazy”. But this is incorrect. Nearly all those who attended the Dyslexia Treatment Centre are much brighter than what others had previously estimated. The parents are often overcome by a feeling of helplessness – they feel inadequate to be of assistance to their child. This leads to a feeling of frustration amongst both the parents and the child.

Dyslexia kids and their reading problems

Andy works hard at his reading which never gets any easier. Andy knows he is smart but why is he unable to read like the other children? It is because he is one of the dyslexia kids around.

Dyslexia is the name of the learning problem many kids have – making it tough for them to spell and read. The problem is with the child’s brain, but that does not make the child dumb. As a matter of fact, many talented people struggle with the problem of dyslexia.

But dyslexia need not hold down a child. With enough hard work and some help, dyslexia kids can learn to spell and read.
How do people read?

To understand dyslexia kids and their problem, it helps to know how reading takes place. Reading is a proper exercise for a child’s brain, and the following steps have to be performed, all at once:

Dyslexia kids have to struggle with the early steps, so it is even harder for them to attempt the steps lower down. So it is hardly surprising that attempting to read and having to deal with so many problems tires out the dyslexia kids’ brain really fast.